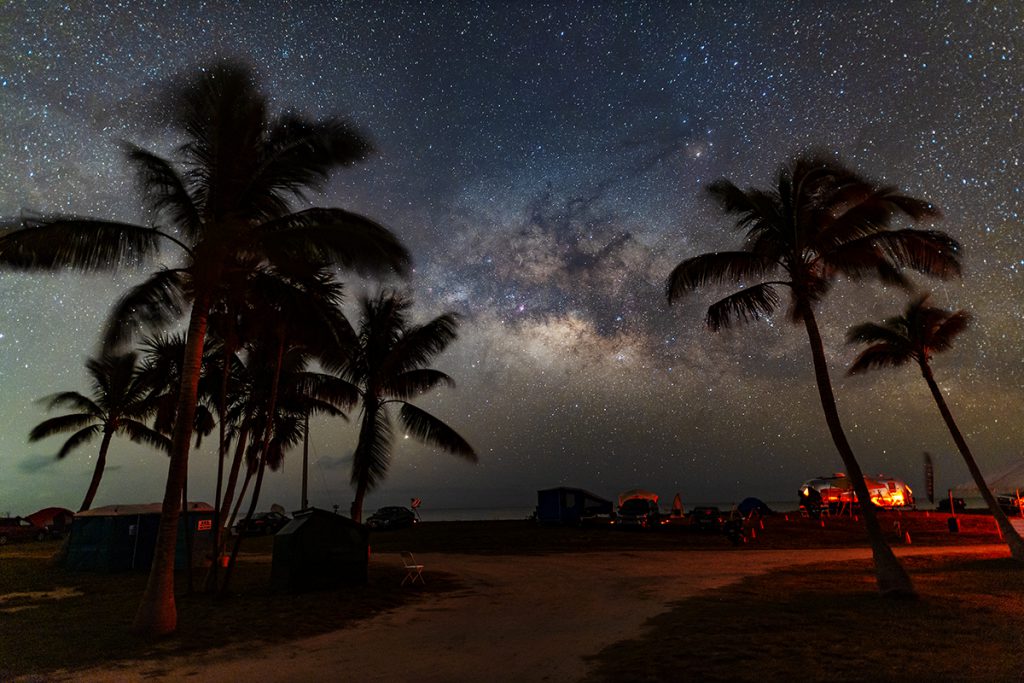 Okay, I knew I was probably trying to over do it for the Winter Star Party, and I was right. Sometimes I’m like a kid in a candy shop! I loaned my 14″ Dobsonian to my friends at Celestron/SkyWatcher who set it up at their vendor pavilion, but I only really setup two of the three mounts that I brought for my own purposes. Naturally this was the Paramount MX+, which I had on the new Helium Tripod, and I also had my Paramount MYT on the older MYT tripod.

The larger mount actually held the smaller of the two refractors I brought, but was my primary imaging system that was driven entirely by an early prototype of TheSky Fusion. Three batteries were involved, an Ego for the mount, a 12V lead acid for the dew heater, and a Yeti Goal Zero 400 that powered the Fusion. The power from TheSky Fusion ran the camera directly (FLI 16200 ML), the filter wheel and focuser. The whole thing was controlled by my iPad, and I recharged the EGO and Yeti during the day. The big 12v actually lasted all week as we only had one evening with dew. Consolidating all these power sources would be nice, and the FLI camera was definitely the biggest power hot. Running it directly off the Fusion however saved quite a bit as opposed to running the inverter to use the FLI power brick.

The second system was the Paramount MYT and it had my 6″ refractor. I had another EGO battery power this mount as well, and another 12v battery to run the focuser. I could have used the Vera Plate 12V, but I don’t like to run the DSLR off of battery (generates additional heat). I also just did visual observing with this mount as it had the WiSky board installed and I could control it also from the iPad using TheSky HD.

So, I probably “could” have setup my third system, a SkyWatcher EQ6, but the work flow for that isn’t quite as smooth as the Paramounts, and it would have required a bit more babysitting. By myself, this would have been a no-brainer, however two systems running automated (or one automated and one visual) was a bit more manageable and allowed me to still talk to people and show off what I was doing without getting stressed about it. A vendor friend sat with me for a bit and was amazed that many people were still getting setup and I had two systems actually imaging already while I sat there sipping coffee and talking to people (I was shooting DSLR on the MYT at the time).

Limited power makes things a little more challenging, but I’ve always pointed out that if you want dark skies… dark skies and readily available AC power are often not found in the same place. Of course, the Keys aren’t that dark, but they are dark enough, and although we should have power, a recent hurricane (and the costs of rewiring the entire campground) has seen to the fact that batteries are going to be a regular thing for the foreseeable future. No worries, the Fusion is a perfect solution for the power savvy imager on the road with significantly lower power needs than a laptop.

Power or not, the Winter Star Party is my favorite annual event. I’ve been a regular speaker there and this year I talked about the coming transition from CCD to CMOS image sensors in astrophotography, and I also with my manufacturer’s hat on talked about TheSky Fusion. I’ve talked about the coming of “embedded imaging” quite a bit over the last couple of years at star parties and recently at the Advanced Imaging Conference. I’m so excited to see this day coming to fruition!

Another change as of this year is that after dominating the imaging contest for the last several years, I’ve retired and am now serving as a judge. I still managed to get a few good images in… and I can’t wait until next year!

What’s next is anybody’s guess… I’m hoping I might still make it to the Texas Star Party, but it looks like we are all on hold for the time being. Meanwhile, nobody’s backyard is closed and I’m going to take advantage of every opportunity the weather brings me!